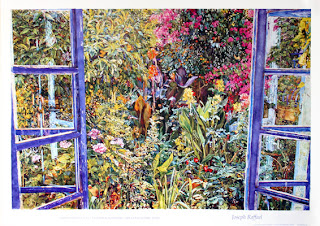 The Open Doors (based on Saki's The Open Windows)
*This short movie clip is just for the extra knowledge.

Questions:
1      Search for the Open Window by Saki on the internet. Read this short story thoroughly. Based on the short story

a.       Identify 3 literary devices in the short story and their significant.
Symbolism

The most important symbol in “The Open Window” is the open window itself. When Mrs.  Sappleton’s niece tells Mr. Nuttel the story of the lost hunters, the open window comes to symbolize Mrs. Sappleton’s anguish and heartbreak at the loss of her husband and younger brother. When the truth is later revealed, the open window no longer symbolizes anguish but the very deceit itself. Saki uses the symbol ironically by having the open window, an object one might expect would imply honesty, as a symbol of deceit.

Narration
“The Open Window” is a third-person narrative, meaning that its action is presented by a narrator who is not himself involved in the story. This allows a narrator to portray events from a variety of points of view, conveying what all of the characters are doing and what they are feeling or thinking. For most of the story, until he runs from the house, the reader shares Mr. Nuttel’s point of view. Like Mr. Nuttel, the reader is at the mercy of Vera’s story. The reader remains, however, after Mr. Nuttel has fled and thus learns that Vera’s story was nothing but a tall tale.

Tall Tale
Vera’s story is essentially a tall tale. Tall tales are often found in folklore and legend and describe people or events in an exaggerated manner. Good examples are the story of John Henry and his hammer, and the story of Paul Bunyan and Babe the Blue Ox. Vera exaggerates the significance of the open window by making it the centerpiece of a fabricated tale of tragic loss.


b.      Where is the climax in the short story? How is this achieved?
The climax of the story is when Mr. Sappleton and his brothers arrived through the
open window. This results in Mr. Nuttel running away from the house by thinking that
they are the ghosts. This climax is achieved when the deceit that Miss Vera played
onto Mr. Nuttel worked.


c.       Describe the setting of the short story?
The story is set in the English countryside dated back on the early 1900s. Throughout
the story, most of the scenes happened in the living room. Besides that hunting was
so popular during that time.


d.      What is the lesson that you can learned in this short story?
The lesson is do not be too naive and gullible in life. Don't be too easy to get cheated
by other people.


e.      In the short story, does Vera shows hospitality to Frampton Nuttel? If Vera were Malaysia,
would she have in like manner?
She does. If she is were a Malaysian, she would't behave in this way. She would not
tell her guest with the fake stories and would have a mild conversation only before
Mrs. Sappleton attend to him.


f.        If you were Nuttel, would you trust every word Vera said? Why?
If I were Nuttel, I will not trust on what Vera had said and pretend I believe it. This is
because a ghost  will always be a ghost and we should not take it seriously.
Commonly, people will always tell ghost stories just to scare us out. Besides that, it is
impossible for the ghost to occur during the day.

AfiqDarreLahungWandy
we R young!!!!we gOnna set the woRLD on FIRE!!!!!! wE can go hiGher than THe SUN..duh~